Here is this original and well executed watercolor by Italian artist E. Torrini (aka E. Forrini). He is listed in Davenport’s and was from Central Italy in the 19th century. This painting depicts an Ottoman man looking up just ending or beginning his prayer. The painting measures 10″x14″. The painting is in excellent condition and has been well preserved behind glass. The painting has great color and I see no fading, foxing, or other damage. It is signed on the lower right.

This was purchased by John Holly Knapp Jr or his wife and was a part of the mansion and collection of art until I recently acquired it. John Holly Knapp Jr. was son to General John Holly Knapp (a General during the Indian Wars of the northern Mississippi region). John Holly Knapp Jr. was owner of Knapp, Stout & Lumber Co. It was at one time recognized as the largest lumber company in the US. John Jr. travelled to many places, including Europe in 1871 (according to the family–he kept a journal) and purchased several fine works of art. John Jr. had died in 1888, but his estate lived on and was promininent in the late 19th century and early 20th century because of the vast amount of land they owned. The estate and the mansion in Menomonee, WI, was bequethed to the Diocese of Eau Claire. This painting had been in the mansion since it was purchased original from the artist. 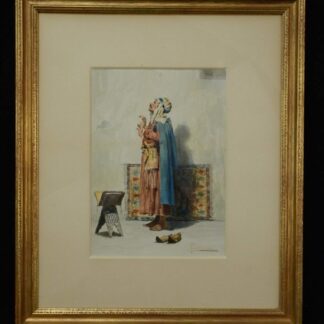