Here we have a framed original photo of the “Last WECO/UNIVAC GUIDED SATELLITE LAUNCH FROM CAPE KENNEDY (OSO-H), September 29, 1971.” This photo is signed by R. H. Harris, Manager of Weco MSE.

This last launch has a bit of history attached to it, because the OSO-H (OSO-7) was nearly lost at launch. This was due to a loss of hydraulic pressure in the second-stage guidance control system, only 7-seconds prior to sustainer engine cut off. The nominal plan was for the spacecraft to be separated from the second stage with the spin axis normal to the Sun’s direction so that the sail could be oriented to the Sun, allowing the batteries to be fully charged on orbit. As it was, the orbit was slightly eccentric instead of circular, and the orientation of the spacecraft immediately after launch was unknown, so that the sail could not acquire Sun-lock. The spacecraft was launched with its batteries fully charged, giving approximately 12 hours for the controllers, directed by NASA’s John Thole, to recover before the spacecraft lost power and command ability. Several hours passed as engineers attempted to interpret the signal strength from the tumbling spacecraft in terms of its transmitting antenna pattern. Finally, an hour or two before the end, Thole decided to abandon caution and changed the position of the antenna by injecting a synthetic error signal into the positioning servo-mechanism amplifier. A bold move, but by luck and skill, control was regained and the mission was saved.

This photo measures 7 1/2″ x 9 1/4″ inside the frame, and 12″ x 14 1/2″ overall. There looks to be some creases in the photo, in the upper left corner. The silver painted frame has some chips and nicks, but it is secure in the corners and is made of solid wood. On the backside, the kraft paper is torn but the information about the mission is still intact. 15720jas 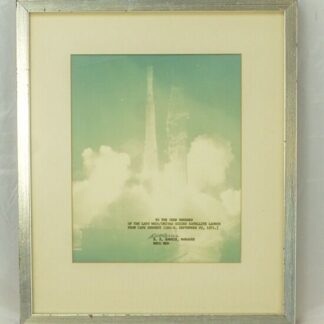